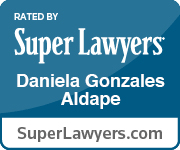 Northern New Mexico native Daniela Gonzales Aldape brings a team-oriented approach to her practice at PY, where she focuses on commercial litigation and product liability.  Daniela routinely steps in to take the reins and maneuver large complex dockets to the best advantage of her clients, and her organization and communication skills are invaluable.  She is particularly adept at engaging in and handling multifarious discovery issues while preserving the simple story of a case for courtroom presentation.

Daniela has tried cases in Colorado, New Mexico, and Texas. She began her law practice at David Graham & Stubbs LLP in Denver. There, she was a member of the trial group focusing on complex commercial litigation and product liability. Daniela joined PY in April 2004 and has been a partner since January 1, 2012.

Daniela graduated from the University of New Mexico School of Law. She met her husband Jaime, also an attorney, while attending a summer law program in Guanajuato, Mexico at the Universidad de Guanajuato Facultad de Derecho.

Daniela’s professional strengths – adaptability, teamwork, and communication skills – are also valuable assets at home, where she and Jaime are raising two sons and a daughter. The Aldape family enjoys learning about and visiting different cultures and looks forward to new food adventures everywhere they travel.