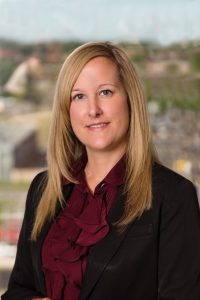 Kerry focuses her practice on commercial litigation, products liability, and property and personal injury. Before joining Prichard Young, her practice also included family law. Additionally, she served as an adjunct professor at John Jay College of Criminal Justice from 2013 –2016, teaching Constitutional Law and Law and Evidence.

Kerry graduated from the University of California at Santa Barbara (UCSB) with a B.A. in Law & Society and Women’s Studies.

She met her husband, Scott, while attending UCSB. Scott is a retired Lt. Colonel pilot in the U.S. Air Force, and as a military family they have lived in several states including Alabama, Florida and Oklahoma.

Kerry graduated from Oklahoma City University School of Law and first practiced at a firm in Abilene, Texas, where she became a partner, while her husband was stationed at Dyess Air Force Base.

Kerry and Scott have one daughter, Ashlyn. They have lived in San Antonio since 2014.