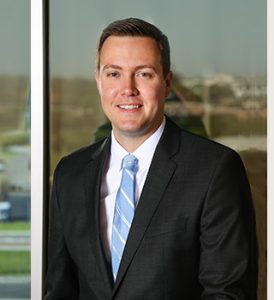 Mark handles a variety of complex cases across Texas and the United States. He takes pride in tackling and solving difficult factual and legal issues. Mark’s practice includes business disputes, product liability, probate and estate liability, as well as property and personal injury matters. For this diversity, Mark’s peers have selected him as a Super Lawyers Rising Star in the “General Litigation” category every year since 2012.

Mark is a native of Seguin, Texas and grew up spending much of his time at his family’s ranch in Belmont, Texas. Before he was an attorney, Mark spent considerable time traveling in Spain, Panama, and Mexico. Mark met his wife Veronica in law school at South Texas College of Law in Houston, Texas. In his off time, he enjoys working cattle with his father, golf, running, everything basketball related, and spending time with Veronica and their two children.